Fun On The Run Kennel

A little about us:

Meredith Mapes, owner and head poop scooper at Fun On The Run Kennel, was born in Fort Worth, Texas in 1993. Her parents didn’t want to raise her in the big city, so the family moved to Anchorage, Alaska in 1994, closely followed by a move to Palmer, Alaska. She learned to ski and dance at age 3, and has been active ever since.

First introduced to sled dogs at age 6 through Girl Scouts, and mentor Bev Greer, she won the first sled dog race she ever ran at age 7 – the Willow Winter Carnival 1-dog race, and she won by only 1/5 of a second. From then she was hooked, and competed in a variety of 1-dog races the next season before taking a break from mushing for a few years to focus on dance and 4-H.

At age 12 she was gifted with her first two sled dogs, Captain and Flint, from a coworker of her mother’s. They came from Mitch Seavey’s kennel, and she was given enough lines, harnesses, and various other bits of gear to start seriously running dogs – just needed some more dogs. That fall she was gifted with two more dogs from musher Sue Allen, Bat Baby and Pancake, who were retiring from long distance running, but still needed a place to stay active. They ran with Meredith for many years before retiring to live in the backyard, including running Junior Iditarod and Junior Yukon Quest.

She joined the dog mushing 4-H club that fall, and started learning more from the leader Larisa Myers-McCoin. That winter she ran her first mid-distance race, the Junior Cantwell Classic, and was hooked on distance racing from then on. Her kennel grew bigger the next year, and she trained 12 dogs for her first serious mid-distance sled dog race – the 2008 Junior Iditarod, where she finished 14th and with a huge confidence boost.

Everything changed for Meredith when her dog team was hit by a snowmachine during the Aurora 50/50 in December 2008 while she was training for her second Junior Iditarod. She was rescued on the trail by Erin Redington, but her two main lead dogs were injured (and never ran the same after the accident) as well as being psychologically shaken up. She borrowed a lead dog from Ray Redington, Jr. and competed in the Junior Iditarod finishing 8th that year, but her heart wasn’t really in it.

Meredith attended public school for the first time in 2009-2010 at Wasilla High School, even taking a class that was “independent study outdoor recreation” supervised by Iditarod musher Sue Allen, where her final was to run the Junior Iditarod. She trained that year with Melissa Owens who had just moved down from Nome to run dogs in Knik, and ran a mixture of her own dogs and Melissa’s dogs in the race.

In 2010-2011 she transferred high schools to Palmer High School, where she had a much better academic experience and joined the cross country ski team. She gave all of her own dogs away, but helped Melissa train and raced in skijor races with Melissa’s dogs, and ran her team in the Junior Iditarod that year as a last hurrah before she moved away for college.

Meredith officially called herself retired from sled dog racing, and attended college in La Grande, Oregon at Eastern Oregon University, before moving back to Alaska the next summer. She was offered a job working for Mitch Seavey in Seward, Alaska at Seavey’s IdidaRide Sled Dog Tours, and had a blast working there for a month in the summer of 2012. Within the first week she said she’d be running the Iditarod in just a few years, and blames Danny Seavey for offering her the job and getting her back into dog mushing.

The kennel is small but mighty – we maintain around 25-35 dogs at any given time, raising a couple litters a year and selling a few pups from each to maintain our small size.

If interested in reading our entire race history, look to the tabs on the left, and you can also find our race plans for the next couple years. If you want to see more photos of the team, you can check out the photos galleries in the tab up top. Shoot us an email if you want more info about Meredith or the kennel! 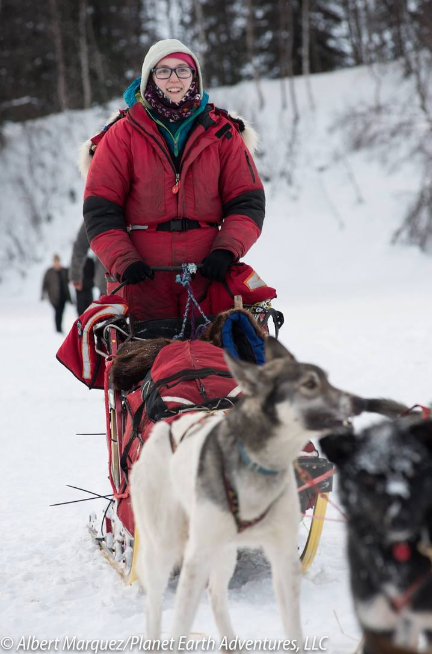 Fun On The Run Kennel